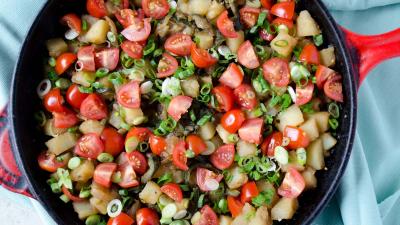 Whether decorating eggs or deviling them, it is estimated that 180 million are purchased for Easter every year. Why has this become a tradition around the world? Easter is a religious holiday, but customs like Easter eggs may be linked to Pagan practices. An ancient symbol of new life, the egg has been associated with springtime Pagan festivals.

Decorating eggs for Easter goes back as far as the 13th century. One theory for this custom is that eggs were once a forbidden food during the Lenten season. People would paint and decorate them to mark the end of the period of penance and fasting. Then they would eat them on Easter as a celebration.

Flash forward many centuries and many advances in science and nutrition; we now suspect that eggs may be incredibly inedible. A 2010 study in the Canadian Journal of Cardiology found a 19% increased risk for cardiovascular problems in people that consume the most eggs.

A 2019 report in the Journal of the American Medical Association, tracking 30,000 participants found that eating even small amounts of eggs every day raises the risk for both cardiovascular disease and premature death from all causes. The more eggs eaten, the higher the risk for coronary heart disease, stroke and heart failure.

According to The Physicians Committee for Responsible Medicine (PCRM), Americans are on track to eat more eggs this year—about 279 eggs on average per person—than they have in nearly five decades. Part of the problem is that the egg industry has scrambled the science, keeping Americans in the dark about the link between eggs and heart disease. In recent years, the majority of studies published on eggs and cholesterol have been funded by the egg industry itself—often resulting in misleading conclusions that downplay the dangers of eggs.

So, if we decide to skip the Easter eggs this year, will we still be able to enjoy one of the most popular springtime appetizers, the deviled egg? The answer is yes and it’s in the potato.

Now, you may be thinking that swapping potatoes for eggs is bad nutrition. What about the carbs? Don’t potatoes raise blood sugar? Aren’t they fattening? Here is the skinny on the much-maligned potato. Potatoes are a good source of fiber, which helps to decrease the risk of heart disease. Animal foods, such as eggs, contain no fiber. Potatoes are lower in calorie density, averaging about 370 calories per pound, which means they fill you up and keep you satisfied longer after mealtime. Potatoes are one of the most satiating foods on the planet. They are the ultimate comfort food. It’s what we put on them and in them that makes them devilish or not.

Angeled “Eggs”*
These “eggs” visually resemble the devilish kind but without the saturated fat and cholesterol. Black salt is a key ingredient. Its sulfur flavor gives the potatoes an eggy taste.

Directions
Boil the potatoes until fork-tender, approximately 15 minutes. Allow them to cool, then cut them in half lengthwise. Scoop out the middle of the potatoes with a melon baller or spoon. Place the scooped potatoes into a food processor. In the food processor, blend the scooped potatoes, chickpeas, two tablespoons of aquafaba, mustard, black salt and pepper. Process until smooth, adding additional aquafaba, if needed. Transfer to a small mixing bowl.

In the small mixing bowl, stir in onion and pickle relish. Taste and adjust seasonings to your preference.

Spoon mixture into potato halves. Sprinkle with paprika, if desired. Use leftover filling as a dip or in wraps.

Breakfast Potatoes**
These potatoes are the perfect comfort food. Serve them for Easter brunch in lieu of an egg omelet or quiche. Try them over grits or pair with fruit.

Directions
Cut the potatoes into half-inch cubes and steam until just tender, about 10 minutes. Remove from heat.

Add the potatoes and poblano pepper and sprinkle with the soy sauce, the dried oregano, the sweet paprika or the chili powder. Cook, stirring carefully with a spatula until the potatoes are well browned.

Top with tomatoes and onions, if desired.