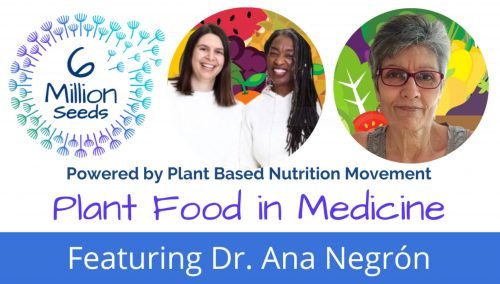 Born and raised in Puerto Rico, Ana M. Negrón is a bilingual board-certified family physician and author of the book Nourishing the Body and Recovering Health: The Positive Science of Food, published by Sunstone Press. She owns a nutrition consultation solo practice, volunteers at a free clinic for the uninsured in Phoenixville, Pennsylvania, teaches young family doctors the role of plant food in medicine, and is a frequent lecturer on issues of nutrition and health. Plants are integral to her practice where group cooking is a regular activity. She helps her patients transition to a whole foods plant-based diet lowering the inflammation at the root of their illness thereby reducing the need for medications.

In 2012, Ana was recognized by the Phoenixville Chamber of Commerce with a Community Betterment Award. In 2017 she co-designed with the Chester County Food Bank a fresh produce prescription program, which runs each year from June to November. Dr. Negrón is a diplomate of the American Board of Family Medicine, is a member of the Society of Graduated Physicians from the University of Puerto Rico School of Medicine, earned the eCornell certificate on Plant Nutrition, serves on the medical advisory board of the Physician’s Committee for Responsible Medicine (PCRM), and is a senior faculty at the Crozer Family Practice Residency in Springfield, Pennsylvania. She is on the speaker’s bureau of the American Vegan Society and serves on the boards of Casa Vegana de la Comunidad and the T. Colin Campbell Center for Nutrition Studies.

We had meat or chicken maybe once a week, but we had all the other vegetables, quite a lot of rice and beans, and salads – which were really not very varied. We also had lots of fruits. Mind you, I’m a child of the 50s, when TV dinners were pushed to give mothers a break. We had ice cream, cake, and cookies. However, we didn’t have them often, rather more like a treat.

What Made You Go Plant-Based?

I came to the mainland United States in 1973 for my residency. Growing up, there was no school lunch. We were sent home for lunch. School ended pretty early in the day, so we had some kind of recess, and then we went home. The first time I ate cafeteria food was in college. In Puerto Rico, the food was prepared on the premises, so it was really very much like what we would eat at home – rice and beans and stuff. I did not really become aware of plant-based eating until I was around 40 years old. It was around that time when things were just mounting; it was ethics, it was philosophy, and I didn’t want any part of the excess, the waste, the animal violence – all of that. That’s what turned the tide for me.

What Is Your Experience Working in a Free Clinic?

I am the only native Spanish-speaking physician for the clinic. I see almost exclusively Spanish-speaking patients. I mean, in its way, it’s helpful for people to have someone who speaks their same language. The lack of a language barrier helps my patients let down their guard, hopefully, and say exactly what’s going on. However, the patient and physician relationship is challenging anyway and people don’t always say exactly what’s going on.

There is a shorthand communication when talking about patients. I didn’t grow up here, and it’s easier to relate when you haven’t been here all your life when somewhere else is also populated by people that have the same needs. The needs of shelter, care, love, belonging. Thankfully, that’s a universal language. I think everybody needs those things.

Along with her book, much of her written material can be found at https://greensonabudget.org/. She is on regular Facebook webinars and recorded presentations with Casa Vegana de la Comunidad from Puerto Rico and collaborates with Coalición Fortaleza Latina Pennsylvania in Norristown, PA. Other recent appearances have been as master of ceremonies in the PCRM Spanish immersion conference titled Más Plantas, Más Salud and as a presenter in the Center for Nutrition Studies Enriquece Tu Plato, free programs which drew participants from around the globe. Vegan for thirty years, Negrón educates and empowers us to recover health by returning to our nourishing earth roots.

Carrie Bruno is on the Board of Directors for PBNM. She is a Clinical Pharmacist and a Certified Lifestyle Medicine Professional through the American College of Lifestyle Medicine. After spending over a decade studying and practicing pharmacy, Carrie felt she had all the tools necessary to educate people on how to manage their chronic illnesses. That is, until she started learning about plant-based nutrition. Her goal is to use all she has learned in both pharmacy and lifestyle medicine to help people prevent, treat, and even reverse chronic illnesses rather than just managing them.