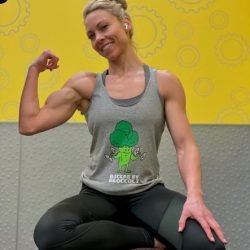 Melissa Busta is originally from Colorado. Having served in the military, she’s lived for a time overseas and later attended Mississippi University for Women to earn her BSN. She has been a nurse since 2011. She is married with two furry friends, both rescue cats.  She worked with the Red Cross overseas, as well as being a ICU nurse, a research nurse with PCRM (Physicians Committee for Responsible Medicine), a clinic nurse, a forensic nurse, and now a cardiac nurse. She and her husband have been vegan for 8 years.

Melissa learned early on that there’s value in eating plants. Her mom set some good examples by requiring she eat a banana before getting any “treats”, and not allowing things like pop and junk food in the house (smart mom!). While beginning her nursing training and career, she was particularly struck during one rotation where a patient whose chest had just been opened for surgery. The surgeon (who himself had been through bariatric surgery) chuckled that he’d had to scrub extra hard prior to surgery getting the chicken grease off his hands, pulled out a mass of atherosclerotic plaque that reminded her of the chicken breast served earlier in the hospital cafeteria! It was truly a “lightbulb moment”. As a nursing student, she was eager to learn about the connection between what we eat and how it impacts our bodies. As time went on, however, she was dismayed to discover that none of her education drew any such connection. She did, however, learn a lot about pills and procedures!

Always a fan of fitness, Melissa has spent a great deal of time in the gym and otherwise working out. So much so, she’s recently competed (and won numerous 1st Place Awards) as an amateur, beating out her non-plant-powered competition! She is currently competing to get her Pro Card in fitness competitions and for the cover of Muscle and Fitness magazine. You can cast your vote (early and often during much of June 2022) at https://mshealthandfitness.com/2022/melissa-bu

Whether in the medical setting or in the fitness/body-building arena, Melissa uses whatever platform she has to spread the power of plants to help build strong, resilient bodies, to have speedier recoveries in training, to ward off chronic disease, and to increase the odds of a longer, healthier life!