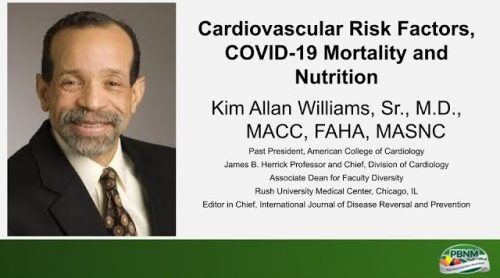 On February 15, 2021, PBNM presented its first program of 2021, Feed the Body, Nourish the Soul, featuring Dr. Kim Williams. Dr. Williams is an esteemed cardiologist and past president of the American College of Cardiology. Dr. Williams is often featured in video documentaries and on medical panels and currently serves as Editor in Chief of the International Journal of Disease Reversal and Prevention. As our keynote speaker, his topic was Cardiovascular Risk Factors, COVID-19 Mortality and Nutrition.

To call his talk profoundly informative would be an understatement. Dr. Williams began with a plea to each of us to take the information he shares directly to our own healthcare providers. As he points out, “the leading cause of death among physicians, including cardiologists, is heart disease.” Even though there is considerable evidence in the scientific literature, physicians learn almost nothing about using nutrition to prevent or reverse illness in their medical training.

As a cardiologist, Dr. Williams has long been aware of the many “risk factors” for heart disease. Since the start of COVID-19, it’s been clear that people with underlying conditions, such as pulmonary disease, heart disease, diabetes, chronic kidney disease, and obesity, are at a higher risk for severe COVID-19 illness. Interestingly, these are the same risk factors that have made heart disease the number 1 killer in America for the past 100 years.

There are other connections, too. A look at the data tells quite a story. 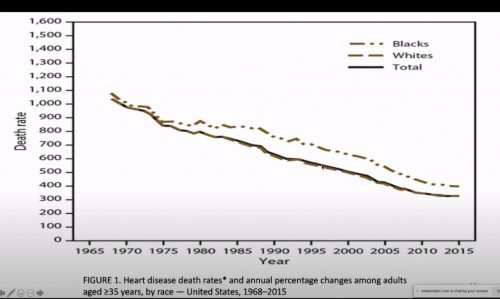 As the pandemic progressed, more information on risk factors and race/ethnicity came to light. One thing became abundantly clear: it is not an individual’s race or ethnicity at the root of the problem. It is their health risk factors.

As the pandemic progressed, more information on risk factors and race/ethnicity came to light. One thing became abundantly clear: it is not an individual’s race or ethnicity at the root of the problem. It is their health risk factors. As this chart shows, between 1968 and 2015, heart disease death rates in the U.S. among adults over 35 have declined in total numbers thanks to management and medications. However, death rates are still roughly 20% higher for blacks than for whites. 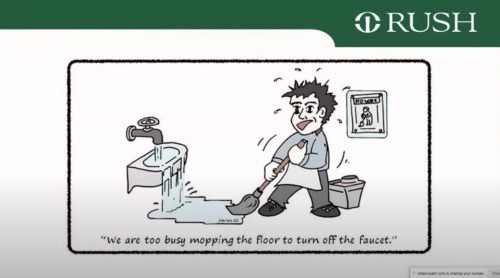 What has also become clear is that while the medical profession is very good at managing chronic disease (controlling symptoms, slowing disease progression), the ability to prevent, stop, and even reverse long-term illness has fallen woefully short. It’s like the profession is very busy “mopping up the mess” instead of addressing the problem’s root cause. Dr. Williams made the point that the most effective path to that root cause is to change the way we eat.

For example, when looking specifically at COVID-19 outcomes, research shows that being overweight and/or having high cholesterol significantly increases one’s risk of poor outcomes from COVID-19. These are clearly food-related lifestyle issues.

To visually amplify the severity of the obesity problem in this country, these images depict the data from 2017- 2019. Moving from left to right, the first image shows the percentages of obesity by state. The darker the color, the greater the rate of obesity in that state’s population. The darkest color represents an excess of 35% BMI, which is severe obesity. The second image reflects the level of obesity in the non-Hispanic white population, still most states. The third image represents the Hispanic population, where you can see a significant increase in obesity. The final image represents the black population, where there is a predominance of severe obesity in most states. We can do better than this. We must do better than this. 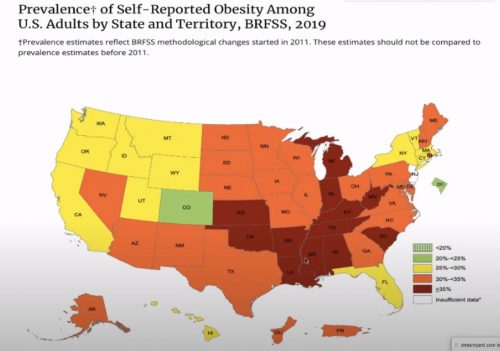 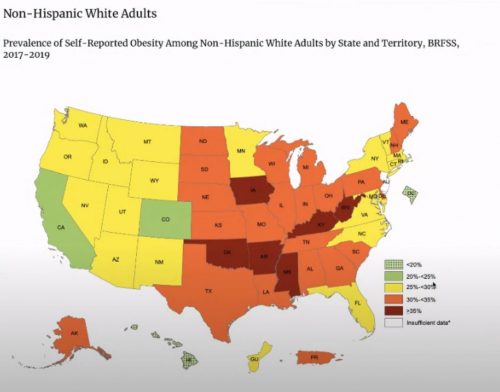 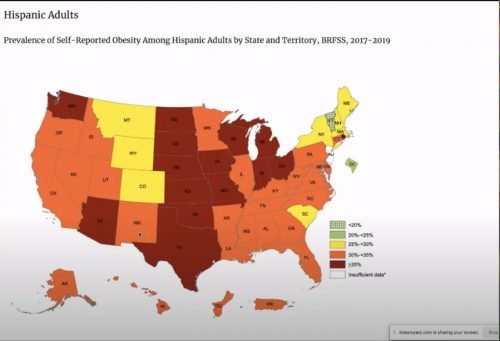 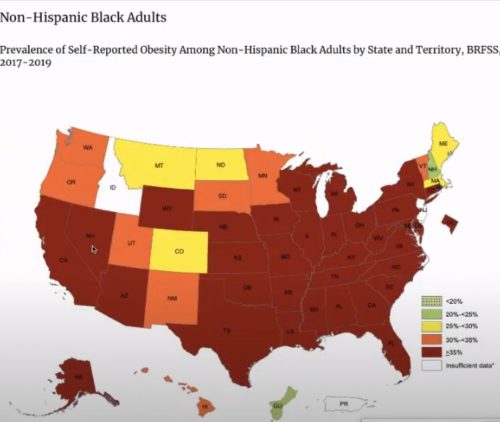 The U.S. spends far more money on healthcare than any other developed country.  Yet, we have the worst outcomes for lifestyle-related diseases. As awful as all this is, the fact is we each have it within our power to radically change this picture.

Dr. Williams indicated that the solution is simple, although not easy.

We have to move away from the Standard American Diet, which is heavy in animal products and loaded with sugar, oil, and salt. Instead, we have to choose nutrient-dense plant-rich ways of eating. The challenge is that the food industry spends billions on marketing to sell consumers foods with virtually no nutritional value and that fill us up with worthless calories. To make it worse, we’re bombarded with mixed messages about diet, which keep us confused and overwhelmed. 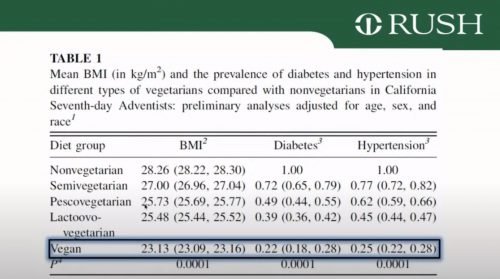 Numerous studies have compared different dietary patterns and their impact on weight and health. Over and over, the evidence shows that people eating a healthy vegan diet have the best long-term outcomes for healthy weight maintenance. In addition, their incidence of both diabetes and hypertension is lower, as seen in this image. Not only that, but studies also show that they typically live, not just longer than non-vegans, but live healthier longer. And after all, isn’t that what we all want? It’s not just about years in our lives, but life in our years! 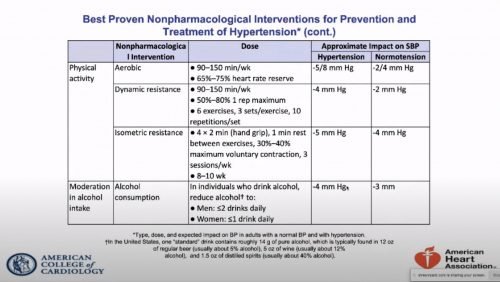 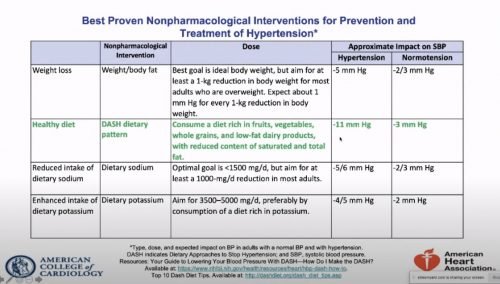 Hypertension is a major risk factor for heart disease, and over and over studies have shown that some simple dietary and lifestyle changes can have a huge impact on bring blood pressure into a healthy range. A diet rich in fruit and vegetables is ideal, but movement is also important. Important to note from the charts here is that each one of the behavior changes noted has a positive impact on blood pressure, and just by following those guidelines it’s possible to bring blood pressure down 20, 30, 40mm of mercury without the need for any medical intervention.

Dr. Williams touched on diabetes, the impact of inflammation, cholesterol, saturated fat, refined carbohydrates, healthy vs. unhealthy vegan diets, keto vs. paleo vs. Mediterranean diets. He even touched on the value of regular exercise to combat high blood pressure and how appropriate diet affects our general sense of wellbeing, allowing us to simply “feel” so much better.

Dr. Williams delivered a wealth of information, only a small portion of which is outlined here. We invite you to watch, or re-watch, his entire presentation here. Feel free to take notes, do screen captures, etc. And, by all means, share the video widely among friends and family, on social media, within the organizations to which you belong, and especially with your own medical providers. Chances are good that it will be the first time your doctor has ever been exposed to most of it. 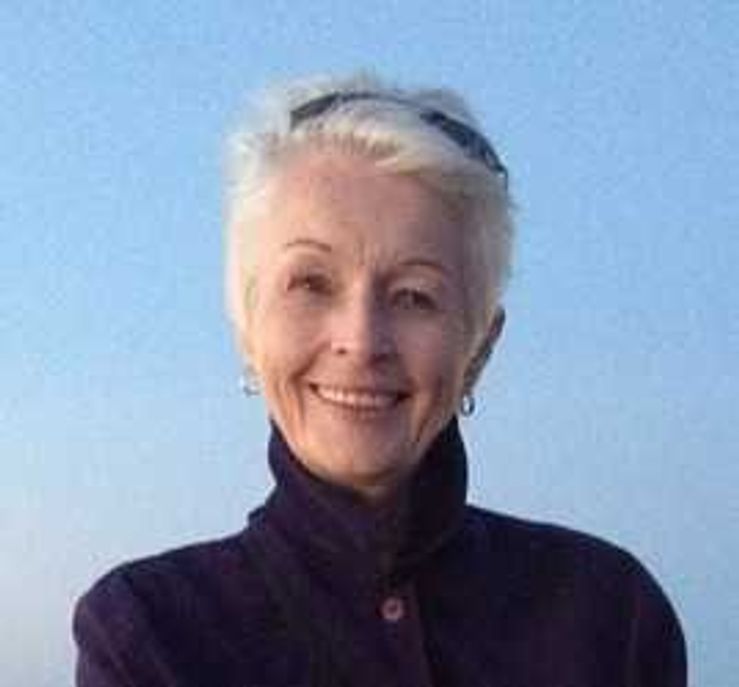